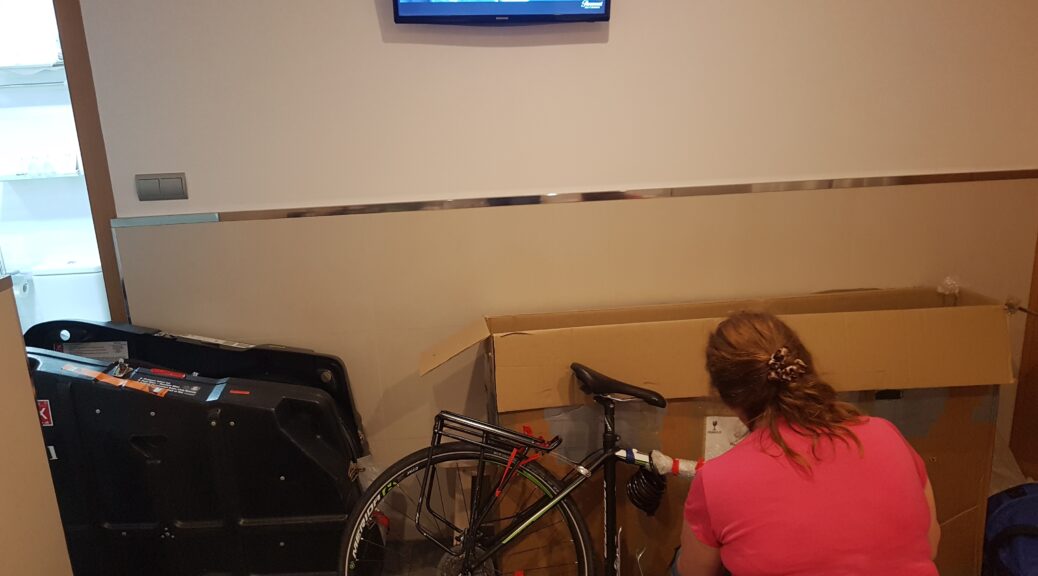 Todays journey to Malaga started with an unhappy face.   Jess didn’t want us to leave her. Nice to know but I’m sure she’ll be spoiled rotten by Keith & Joanne.

The journey to East Midlands airport went smoothly with the only hiccup –  being charged £5 for rapid drop off.  Rip-off Britain – Grrrrr

The airport itself was quiet & baggage check-in was smooth with no queuing.  Surprising given we had two bikes.

At the outsized baggage desk I went first.  Lucky I did because the computer selected my box for a random inspection.  Mines a bike box Allan so was easily opened.  Sarah’s bikes taped up in a cardboard box which would have been a nightmare to open & re-tape after.

After the bikes & bags had gone down the conveyor for a good kicking we went outside and ate our lunch on a concrete anti terrorist block. Not the best location but away from the great unwashed in the terminal.

We went through security (randomly picked for a scan) and through to duty free shops.   Here Rip-off Britain went into overdrive with a bag of M&M’s retailing at £6.

The flight was only 2/3 full and pretty uneventful. Malaga airport was efficient except for the Spanish immigration officer who threw our passports back at us. A consequence of Brexit I would imagine. But pretty disappointing as I’d said hello and thank you in my best Spanish ?

The plan was to get a bus from the airport to our hotel in Malaga. The internet said it was “Linea A”. In the end this worked well but not till after a little asking around.

The hotel is basic but clean with friendly staff. A randon drunk guy helped with the biked up the stairs to the hotel reception. Friendly and articulate (in English) unlike your average uk pisshead. I tipped him €5 which he was well happy with.

We built the bikes up and then went for a quick meal.

Then back to bed for an early night…