Today started with the sound of rain again and it was cold – around 12°.

The first disaster of the day was leaving one of my cycling shoes out in the rain all night – again.

We quickly packed in a lul in the rain and put bikes and gear in the covered table tennis area while we had a croissant for breakfast. We set off north in light showers for the ferry at la Pointe de Grave.

We then did 30+ miles in forest wilderness with only a single tomato for sustenance – no shops anywhere. When we finally reached Montailvet we were starving and dived into the first cafe – a small surf bar called Williwood. We had a quality burger, frites and beer before continuing to the ferry. This is when the second disaster occurred – while putting my jacket on I felt a sharp pain in my finger – to cut a long story short I’d been stung by a wasp that was trapped in the lining of my jacket. I’ve never been stung by a wasp & it’s actually really painful with my finger swelling considerably.

With the sun on our backs and fueled by quality sports food sped off to make the 5pm ferry overtaking several eBike on route ?.

It was refreshing to see the French don’t go for health & safety crap an allowed all the bikes to ride onto the ferry. Strangely young and old all managed it without fatality! As Sunday is heavy rain we are hoteling tonight and may well have a rest day tomorrow. 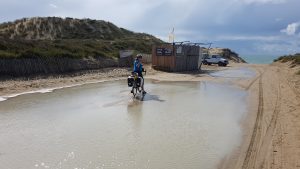 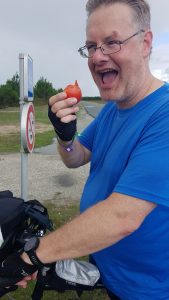 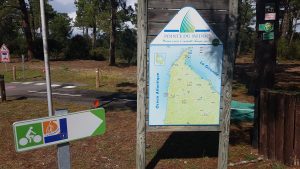 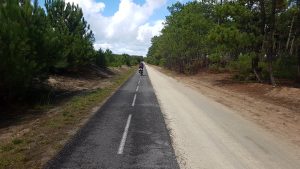 Thanks for all your messages of concern following the wasp attack. Due to the high number of messages I can’t reply to all in person ?

It was touch & go for a while yesterday but I survived the night. The swellings down a little but it still feels like its been hit it with a hammer !

On a serious note it’s amazing how such a tiny amount of venom through a puncture too small to be seen can have such an affect the human body..