Perfect start to the day – warm clean dry hotel room. Only problem is the room stinks – probably because everything we own now stinks. Sarah isn’t happy about this and stars having some deva like behaviour demanding some new clothes & wanting to burn the old ones. Luckily no shops were on route ?

Easy miles in the morning dispite some stiff legs. The route continued on the Nantes-Brest canal which again was beautiful. Lunch was a fromage baguette by La Blavet, a large resovoir.

We continued down the canal till a “route ferme” sign. The “deviation” went up a serious hill so Sarah decided to ignore the signs. Beautiful route & no problems until the route was blocked by a guy with a mini-digger digging the route up ! Sarah used her feminine charm and persuaded him to move the digger and let us past.

About the 40 mile mark we’d run out of water and were getting seriously thirsty. There aren’t many cafes on route so we were happy to spot one of the lock keepers cottages was a cafe – problem was it wasn’t a cafe just some Brits drinking in the garden of their house. Anyway to cut a long story short they gave us water and several glasses of wine ? lovely people and they were southerners !

Wine fueled we easily made it to Carhaix & another hotel – campsite closed. Only one days cycling left to the finish 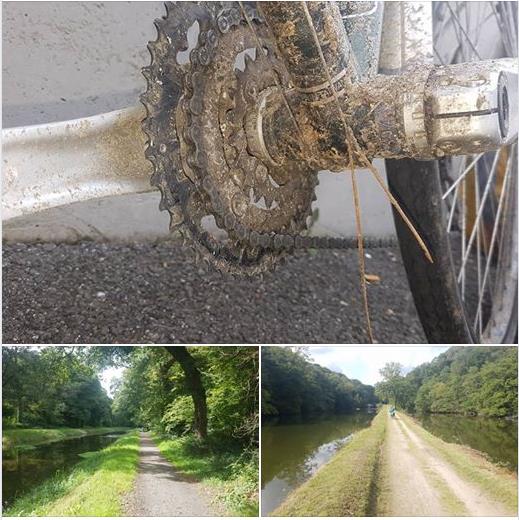