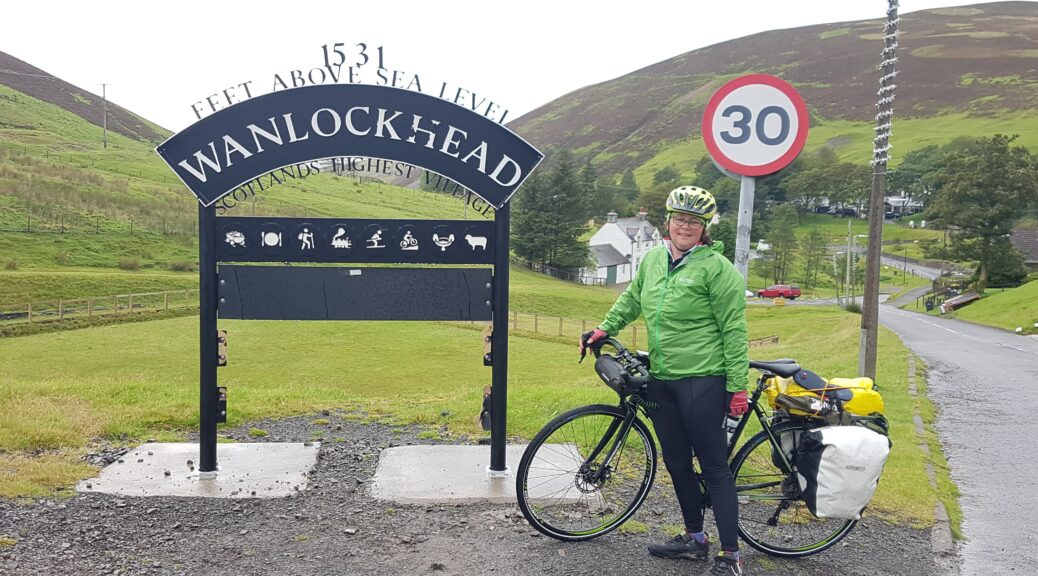 We found the SW300 route from the following website   https://sw3004.wixsite.com/southwest300  which is well worth a view.  The guy who came up with this is a super athlete so there are planned routes for 2 to 6 days.  The map below shows the SW300 route as defined on this site.

A zip file containing the KML or GPX file can be downloaded from the links below:

Well it’s circular so you can start where you want but if you’re travelling from the south then Dumfries is the first (and easiest) place you come to from the motorway.  We were travelling from Cumbria so this worked well for us.

We parked in the rail station car park  (postcode DG1 1NF).  There is parking each side of the train line, we found it best to park in the area shown on the map below.

It has cameras so probably as safe as anywhere.   There is a housing estate where you could park for free on the route out of Dumfries but you’d have to be careful not to upset the locals.  If you’re cheeky you could get away with parking at the entrance to the station as shown below…

Being circular you’ll probably get a head wind at some point so no real advantage either way.  We chose to go anti-clockwise.   For us, starting from Dumfries for us this was a good way to go as it got what I think is the hardest day out the way with fresh legs.  The loop out to Elvanfoot and back is beautiful but a lot of ascent when carrying a tent !

If you’re an endurance cyclist with an arse of leather and pistons for legs then 24 hours is the target.  For mere mortals like me it takes significantly longer, and I want it to take longer.  For us the point of doing this cycle was to see the Dumfries and Galloway area.   You can’t really do this when you’re arse up, head down going as fast as you can !

So for the point of this blog I’m going to assume the reader is a mere mortal who wants to see the area too.  So do it over a week or longer & you give yourself time to see this beautiful area.

The route that loops out from Carronbridge round to Mennock via Elvanfoot is great and importantly has very light traffic.  The same cannot be said for the route from Thornhill to Carronbridge which runs along the A76.

We changed the route to quieter roads that avoid the busy A76 section. Our detour is shown in blue.

The advantage of this route is its safer and takes in beautiful Drumlanrig Castle shown below.

Day two was a pleasant route on mostly quiet roads. The exception to this is a section on the busy A76 from just after Kirkconnel to New Cumnock. There’s no easy way round this but we did come up with a detour that reduced it by half. Its an easy detour & is shown below – the yellow arrow shows the original route and the blue shows our detour…

Now the only downside of our route was staying in Girvan – its a hole with only four redeeming features:

It’s ok for a night, especially when the weathers good but don’t get too excited !

Day 3 Girvan to The Mull of Galloway

Leaving Girvan there’s a busy section to Barhill. From Barhill over to Glenluce Abby is a great road with little traffic – you’ll really enjoy this section. The roads called the Forest Road and goes to Glenwhilly and New Luce. A slight warning the road is over high fell land with not much up there so take supplies. The route towards the Mull of Galloway is ok but busier.

Day 4 – Mull of Galloway towards Wigtown

You’re on an A road, the A747 down towards the Isle of Whithorn. Don’t worry we found this to be a quiet and beautiful cycle. If you could plan your journey an overnight in Isle of Whithorn would be recommended.

The official route follows the B727 (old military road) out of Gatehouse of Fleet. This is a narrow and busy road so we found a diversion through the Cally Palace Hotel and Golf Course. The picture shows our route in red and the proper route in yellow. You can see where we got a short distance out of Gatehouse before turning round to find a quieter route. Please note that the blue dotted line marks where the route is “off road” on rough track. If its wet & you’re on a fragile bike with skinny road tyres this may not be the route for you. We did it on Dawes tourers with Schwalbe Marathon 34mm tyres & it was fine.

This detour wasn’t quick but it was a very pleasant and traffic free route. When we hit road again just before Girthon we tracked south to the coast via Knockbrex and Ingleston before joining the proper route at Borgue. This again was a really beautiful and quiet route

Our last day we deviated from the official route significantly. We did this for two reasons. The first reason was that we needed the quickest route to Dumfries before a storm came in later in the day. The second reason was that we’d cycled this part of the route before and found it busy – I don’t like wet and busy…

Our route is shown in red and the official route in yellow. Having done both now we think the red route using the B727 to be the nicest.

If you’re reading this you’re probably planning your own trip. I hope some of this helps but I’m sure you’ll enjoy it 🙂