Info available on the web:
Below are some web links to sites with info on the route:

When to go:
Jobs & kids limited when we could go – our window was September, starting on the 10th for 3 weeks. This is pretty late in the Velodyssee season & we found that some of the more northern camp sites were closed. The up side to this was that it was pretty quiet – we virtually had the route to our selves.

On the whole the weather was kind to us with only a few days rain. The temperatures were not hot but still T shirt & shorts cycling for most of the time. Night time temperatures dropped low & meant my thin Aldi sleeping bag was not really up to the job. I think if we were doing it again we’d only go about a month or so earlier. The temperatures would be warmer and we would still avoided school holidays. For us one of the joys of this route was it was not crowded ! The other advantage of going later in the season is that accommodation is slightly cheaper 🙂

Route finding & Maps
The route itself is pretty well documented on the Velodyssee site and is signposted between Roscoff and Hendaye with the logo on panels throughout the route. Depending on the region crossed, you may find different types of panel bearing “La Vélodyssée” logo.

So you have two real options for navigation…

We opted for a mixture of the two. I took Michelin maps, or scans of with the route marked on it and I had the route on a phone app.

So how did it go ? Well the printed maps are far bigger than a phone screen and were useful for both of us looking at where we were & general planning. The maps didn’t work well for actual navigation because they had insufficient or no details – this is where the phone app came into its own.

The app, which could be zoomed in to street level showed a “you are here” and the route. I had the phone mounted on my handlebars with a rubber mount . This made it very easy to follow without constantly having to stop to refer to maps. I think the ability to know exactly where you are without having to concentrate on paper maps allowed us both to enjoy the sights more and not have to stop so often.

In summary I’m a convert to electronic mapping though there is a down side which is battery life. Constantly having the screen & GPS on uses the phone battery quickly – too quickly. Luckily I’d worked this out before going & had taken a USB battery charger & the bike had a dynamo hub. More on those later…

My phone is an android phone and the app I used was Maps.Me.  Onto this app I had loaded the .GPX route file which is available from the Velodyssee site. In addition to this I loaded waypoints for all the camp sites in France (details later). The only caveat to electronic mapping is rain. My phone is waterproof but the screen failed to respond when it was raining. I think it was my phones was saying it was time for a coffee stop !

So what about the signs & fingerposts ? Well in some areas they were brilliant but in other & especially round towns a bit scant or missing. 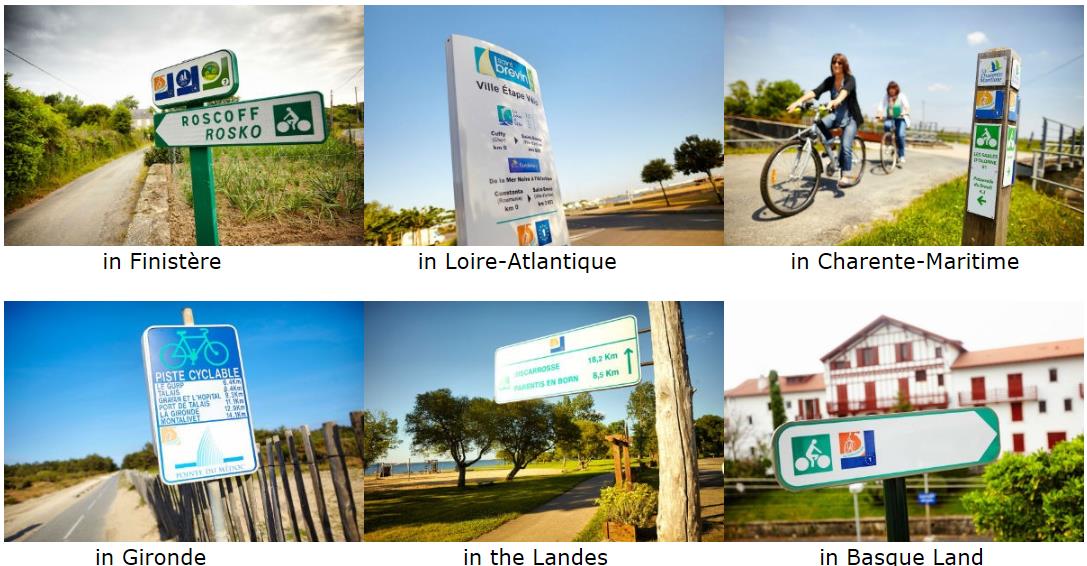 Which Direction ???
This got us thinking for a while….
Ideally we thought it would be best to start in the north & move south so as it got cooler through the month we would be moving towards the warmer south. There were two issues with this plan:

The ferry issue settled it & we decided to cycle south to north… If we were doing it again we may go the other way as we felt the southern half of the route was more pleasurable.

Travelling from the UK:
With the direction set I then looked at the logistics of getting to the start at Hendaye. In principal it seemed simple. Train from Penrith to Plymouth – ferry to Santander – Train from Santander to Hendaye. The return being ferry from Roscoff to Plymouth – train from Plymouth to Penrith & home for tea & medals…

Sadly nothing is that simple. The trains to Plymouth were very expensive and trains seem to hate bikes. So for this bit of the journey it was cheaper (and easier) to take the car & park it up for three weeks (yes it is madness). The storage company we used for the three weeks was SECURE OPEN STORAGE www.sosplymouth.co.uk Ok so that bit sorted…

Ferries – they are great. All easy there. The fun started when trying to sort train travel from Santander to Hendaye. The top line – there is no through train. You have to use different trains from different companies with different web sites. Joy… Anyway this is what I found.

We had originally planned to take two days to get to Hendaye and have a stop in Bilbao.  As it worked out we managed to get to Hendaye in the day but arrived late ~11:pm.  There were no hotels open in Hendaye so it ended up being another couple of hours before we got the tent up somewhere – and all in the rain.

Accommodation:
We decided it would be fun to camp with the odd night in a hotel.  I got waypoints for all the French campsites on my phone app. I used Maps.Me and the waypoints from www.archiescampings.eu/ This was a big help along with Google maps come the end of each day for finding campsites. I can’t remember the exact method for putting the GPX files and waypoints into Maps.Me but if you need a hand email & I’ll work it out & let you know.

Bikes:
We took Dawes Galaxy tourers with rear pannier racks & Schwalbe Marathon Plus Road tyres (32c). This setup was great for the vast majority of the route with only a couple of muddy sections where off road tyres would have helped. With regard to gearing – both Dawes have triples. The granny ring was only used once in the north where there are a few hills. Apart from that the route is pan flat !

Spares & tools:
We decided France wasn’t a third world country 😉 so we didn’t need to take loads of spares. Just basics were taken.

The dry bag was filled with tent, stove & sleeping gear. This was strapped with bungees between the two rear panniers. This seemed to work well with bungees providing flexibility to secure shopping as well.

Tent:
None of our tents were suitable so we had to purchase new. Neither of us are spring chickens any more so we wanted some space & comfort in a tent. Also I didn’t want too much weight. Days of research later we settled on the Vango Xenon Ultralight 2 https://www.vango.co.uk/gb/tents/1183-f10-xenon-ul-2.html

This tent did work well. Its good points are:
• Light 2.1kg
• Easy to put up – important when its pissing down…
• Big enough for two normal people to sleep without being on top of each other
• Gear storage in the front porch
• Oversized stuff sack – this made packing up considerably easier.

In conclusion this tent worked well for us & I would recommend.

Sleeping bags & Mats:
Sarah took her trusty down bag & I purchased a new synthetic lightweight 2season bag from Aldi. The Aldi bag packed small & light but it ended up not providing enough warmth for the cold October nights. In addition it was a little small (tight) on my 6’1” 105kg frame. Since the trip I’ve purchased a Decathlon bag – it’s a little bigger and heavier but works better for me. 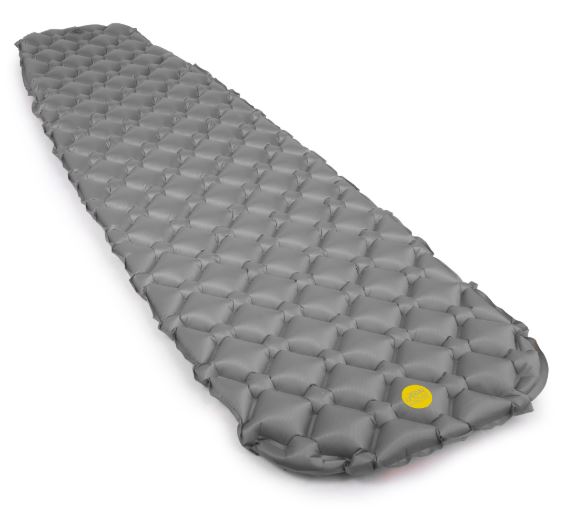 Both of us had old Thermorests. These were both heavy and bulky so we looked for alternatives. Not an easy choice as our old bones needed comfort but without the bulk & weight. Again after endless internet hours we ended up buying Alpkit Cloudbase sleeping mats.

The cloudbase is an inflatable airbed who’s material has no insulation properties. It inflates to a thickness of 5cm. The material it’s made from looks thin, it packs up really small ( ⌀ 8 x 28 cm) and weighs 415 g.

Initially I was dubious but went for it thinking if it did fail under my bulk (105kg) then we’ll never be far from an Decathlon in France ! It did work well, I shall be using again and can recommend.

Other Kit:
We both took seats with us. Madness I hear you all saying ! Well the thinking was that we’d be spending time in camp sites & it would be comfier/less painful/ dryer not to be sitting on the ground when cooking / relaxing.   Sarah took a Heliox seat & I took a stool. They were just bungeed onto the rack with the dry bag – simples…
They did work well & I would take again for longer trips – you can’t beat a bit of comfort !

Stoves & Pans:
We purchased a Primus Omnifuel stove for the trip. Sadly some clown forgot to pack the gas hose so I cannot report if it was good or not. We ended up carrying it for the whole trip + another cheap stove from Decathlon.
For pans we took a two pan & cup set , a couple of titanium spoons and a swiss army knife. This worked well & I don’t think we wanted for more cooking stuff. The knife did for wine corks & cutting baguettes & cheese.

Electricity:
I thought keeping phones, lights, USB power banks, Garmins all charged would be an issue if we didn’t get mains every night. So after more internet hours I ended up buying a new front wheel with dynamo hub. The thought being that the variable voltage & current from this could be regulated and used to charge a USB power bank. Simples….

Great in theory but ended up being a fail. The wheel build from Spa Cycles had the wrong dyno hub put in – one that was not up to charging stuff. I didn’t realise this until we were on the trip so the system I’d setup just didn’t charge. After the trip Spa Cycles were great & rebuilt the wheel with the correct hub – it now works great.  If you’re thinking of getting a Dynamo wheel made up I would recommend Spa Cycles. Errors can happen – we are all human. What is telling is how people & companies react – Spa were brilliant & the staff are very knowledgeable.

…but for the trip we relied on the USB power banks. We charged these whenever we could & were ok for the trip. Its good to have a USB mains charger with 4 outlets this allows several things to be charged simultaneously if there is only one socket. Sometimes we had to leave the power banks charging over night in the camp site toilet blocks. Lucky they were not nicked…

We loved cycling the Velodyssee…   The route, the country & people were brilliant. Yes there are a few small issues with route markers on the odd occasion but that’s trivial and part of the adventure.  I would say it’s a great introduction to cycle touring – a sort of cycle touring lite ! Why do I say that – well because it’s so setup for looking after cyclists.
If you’re strapped for time & can’t do it all I’d say do the southern part from Nantes (or La Rochelle or Royan) down – that was our favorite part.  Would we do it again – yes, but I think it will have to wait till retirement…
If you’re reading this then you’re probably looking at doing the Velodyssee. Great – just do it, you won’t regret it. If you are new to touring and have questions please email us & we’ll try to help.