Woke to a sea mist this morning after a very cold night. The Aldi sleeping bag just isn’t up to single digit temperatures !

Several cups of coffee saw us on our way by 10am. Tarmac paths took us quickly to the large city of les Sables D’Olonne which was beautiful. From Sables we followed the coast on gravel/sand/mud paths which passed some beautiful houses. This section of the route is more populated than the southern section but there is still loads of space compared to the UK.

Found another lovely camp site on the coast. The site has washing machines * dryers so we decided to do all our washing before going out for food. After getting the correct coins from other campers we set the dryer going and went off for food. The nearest restaurant was part of a bowling alley – we were tired and hungry so went for it. It turned out to be a fantastic really up-market restaurant. The food was wonderful but the very camp waiter really didn’t like us. Maybe it was because we were really scruffy and were wearing clothes wed slept in the night before. Anyway great food but zero tip 😂

On returning to the camp site we went to retrieve our dry washing. In hindsight the cool “delicates” cycle wasn’t the one to go for – all our clothes for tomorrow are still wet ! 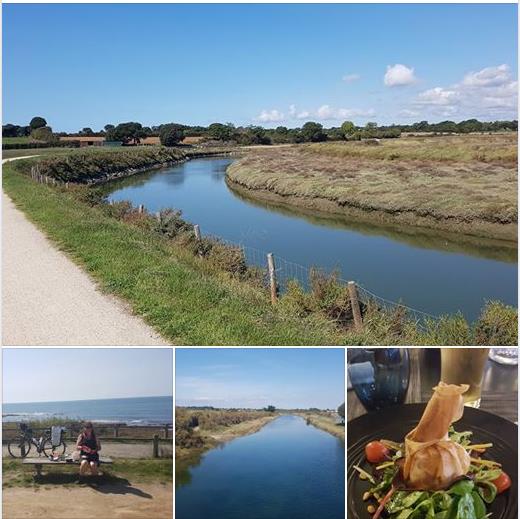